More than, less than, equal to Worksheets 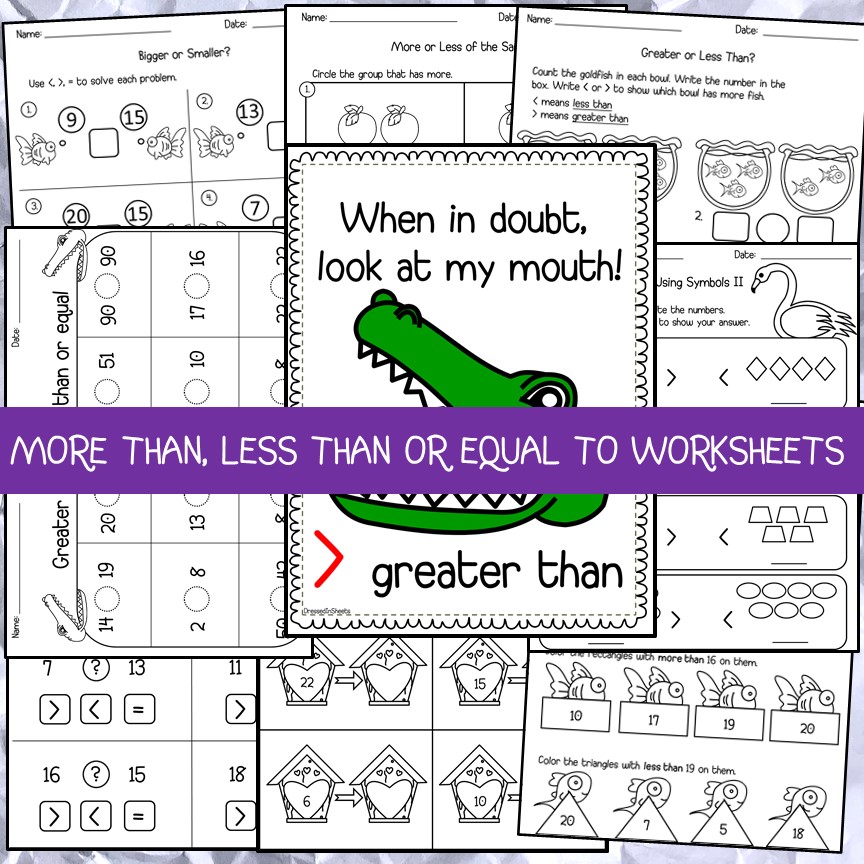 These worksheets will help your student know: more than, less than & equal to problems while they go through a smooth transition from easy to difficult. Some of the activities in this pack will require scissors and glue.

-Kiddos are instructed to circle the group that has more/less.

-Posters to hang in your classroom board to remind the children that when in doubt they should remember the crocodiles mouth.

-Students pick a set of numbers (or you can come up with them) and they should determine if the numbers are less than , more than or equal to each other. In the line, they should write ___ is greater than___. They can use the crocodile cut out page to glue a croc to show their answer.

-The students cut the numbers out and paste them in the correct side of the crocodile to demonstrate their knowledge. This worksheet would look great in a bulletin board 😉

-Cut the crocodiles and decide whether the numbers are greater than or less than each other. Place the crocodile in the corresponding square.

-Circling groups that have less/more.

-Counting objects. Write the number of objects on the line. Circle the group with more/less objects.

-The kids count flowers in each pot. Will write the number in the box. Write < or > to show which pot has more flowers.

-Circle the largest/smallest number in a set of numbers.

-Count the shapes and write the numbers. Then circle the > or < symbol.

-Add both equations in each row. Decide whether the answers are more than (>), less than (<) or equal (=) to each other.

-Look at both numbers in the balance. Decide whether the numbers are more than (>), less than (<) or equal (=) to each other.

-The kiddos use the numbers from 10 to 15 to make the statements true. How many different ways can they find?

-Write a number that is less than the number shown.

-Write a number that is more than the number shown.

-Coloring the symbol that makes the equation correct.

-The student looks at 2 numbers and decides which symbol fits the equation.

-Student looks at a number given and colors the numbers that are less or more than the one given.

-Place value worksheets in which student uses >, <, and symbol to compare numbers.

Please take a look at the thumbnails to get a glimpse of what this super mega action packed resource contains.

*Note: You do not have to be a teacher to purchase products.

Number of items in cart: 0